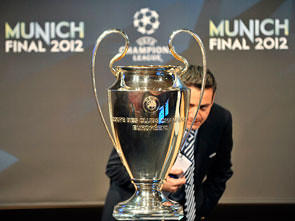 2011-2012 season has come to a head with its so awaited cherry on a cake left to enjoy – UEFA Champions League Final. The game will begin on 19 May 2012 with such legendary teams to fight as Chelsea and Bayern Munich.

The whole show will be held at the Allianz Arena in Munich, Germany that is another advantage for Bayern Munich playing on the home ground.

Both teams have strong background at dramatic beating other respected clubs on their road to final. The last matches between Chelsea and Bayern Munich were in 2005 during 1/4 UEFA Champions League. Chelsea was stronger in this fierce confrontation (4:2, 2:3) and won its ticket to semi-final.

Of course, the things have changed since that time. Let’s find out who has more chances to win.

Bayern will end BundesLiga on May 5 with 2 weeks left to regain power and prepare to the finals. Chelsea can’t boast of such opportunity. The last Premier League match will be held on May 13. Moreover, Chelsea needs to win as never before – to appear in top 4 and join UEFA Champions League next year. However, it will make them to play more fiercely to snatch victory at any price.

Bayern has lost three key players – David Alaba, Holger Badstuber and Luiz Gustavo. All of them picked up fatal yellow cards playing against Real Madrid at the Santiago Bernabeu .

However, Chelsea losses are much greater – their captain John Terry got red card during match with Barcelona. Raul Meireles, Ramires and Branislav Ivanovic also will not be able to face Bayern at the Allianz Arena. Thus, Chelsea lost almost all its main heroes to fight with aggressive Bayern.

Moreover, Bayern leaders – Frank Ribery and Arjen Robben – are in fantastic shape to become a serious threat for Chelsea’s defence.

Coaches are the other thing to consider. Bayern manager Jupp Heynckes is much more experienced than young Roberto Di Matteo. However, the motivation is the key to success. Roberto Di Matteo is just acting as Chelsea’s coach on an interim basis until the end of the season and he needs this victory to prove he deserves a long-term contract.

Another reason for Chelsea coach to fight and win is about $1,000,000 promised by Chelsea Club president Roman Abramovich for UEFA Champions League trophy. Seems to be tempting 😉

To sum up, we should say that Bayern won Champions League four times and reached the final 4 times. Chelsea can be proud of only achieving the final match. Once. However, even German giants can fail when daring Englishmen are eager to win at any price. Just choose your favourite before this dramatic show starts.