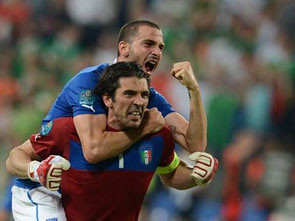 Germany and Italy are classic rivals to fight for the best football prizes as well as for EURO 2012 trophy. Germans have never managed to win Italians during World Cup or Europe Championships. However, this team became Europe champions tree times. Let’s find out what team is supposed to win semi-final Euro 2012.

Defeating all the members of “death group” (Portugal, Netherlands, Denmark), Germany proved to be the best team with maximum points (9) won during these three matches. Yeah. They won EVERY match.

The epic beginning was Germany vs Portugal (1:0) with the next confident victories celebrated over Netherlands and Denmark. Being a group B winner, Germany fought with group A team – Greece. During quarter-final Germany “killed” Greece (4:2) presenting us superb show. They gained entrance to semi-final with grace.

Key German players are Mario Gomez, Mesut Ozil, Philip Lahm (their captain). They all are ready to fight to the death and present us smashing football. With one of the most powerful player of EURO 2012 Mario Gomez, German team headed by their coach Joachim Löw is the best scorer. At least now.

Played within group C, Italy fought with such teams as Spain, Croatia and Ireland. Their desire to become top of Europe is irresistible. They started with favourable draw playing with the present World Champions – Spain (1:1).

Then, the match with Croatia proceeded where draw happened again. The last match with Ireland brought them so awaited victory (2:0). And at last during the quarter-final exhausting match with England that ended with penalties (4:2), they managed to get their tickets to semi-final.

Italy can boast of experienced football players like well-known Andrea Pirlo as well as new talents as Mario Balotelli. Being a well-balanced team heading by Cesare Prandelli, Italy can surprise any team during this championship.

During the latest five matches between these two monsters Italy won 3 times, Germany none, 2 Draws.

The main intrigue of this semi-final match is whether Italy team can win over Bundesteam. Germany has three days more to regain power after quarter-finals while Italy is pretty tired after penalties during match with England. Germans have more time to rest and can appear stronger than Italians during their destiny-make match.

If need more statistics, Germans gained EURO Cup three times, while Italy managed to get this trophy once only. Well, Germany played perfect during this championship, but they usually lose their games with Italy.

Let’s check whether this tendency works on June, 28 when semi-final match held in the National Stadium, Warsaw.