It is high time for EURO 2012 to determine its favourites. 16 competing European teams will meet to find out who deserve to continue this epic fight and become the champions of Europe.

1A vs 2B – meet on June 21 at The National Stadium football stadium located in Warsaw, Poland.

Let’s analyse all the teams of both groups as well as the leaders that will definitely enter quarter-final.

Intrigue is the best word to describe the whole situation. With two matches held, all the teams of Group A have equal chances to win the championship.

The best results are shown by Russia that defeated Czech Republic (4-1). However, it is just draw with the tournament host – Poland, but still Russia presents us a spectacular game with the most serious tactics if talk about the group A teams.

To gain the second entry to the quarter-final will be a real challenge. All three teams – Czech Republic, Poland and Greece have equal chances to win. The toughest match is going to be between Poland and Czech Republic. Who wins goes further determining the favourite.

Greece should pray for draw in this match (Poland and Czech Republic) to get the chance and fight for entry to quarter-final. Anyway, to enter quarter-final Greeks should try and win Russia during the final match within their group. Too many if…

Czechs showed not very impressive game during their match with Russia. Moreover, Poland plays on the home ground. They will fight to death, because it is the last and the only chance to achieve the next stage in the tournament.

Our prognosis: the most awaited favourites are Russia and Poland

Group B – Predictions Who Wins

“Death group” has prepared a real excitement for you. All teams are real pros and won’t give up halfway to so awaited trophy. Germany and Netherlands were the main leaders at the beginning of the championship. However, the first matches prove that there are no weak teams in this group. Everyone will fight to death and win.

The match with Portugal was a real show when two teams fought head-to-head. Thanks to Mario Gomez who managed to score a goal at the end of the match, Germany won Portugal (1-0). 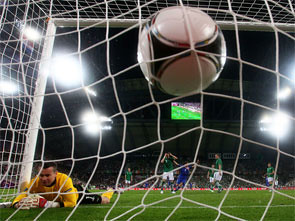 After disappointing defeat during the match Netherlands v Denmark on 9 June, there is no simple answer who is the favourite in group B. Unexpected things happen and unpretentious Denmark proved that also can fight fiercely.

Perfect tactics with one of the world’s best football player – Cristiano Ronaldo, Poland has great chances to appear in quarter-final. Maybe their loss during the match with Germany makes them even tougher.

No one believed in them. No one cared. Till they won Netherlands and made another sensation of this championship. Now Denmark also have some chances to achieve quarter-final.

Every match played within Group B promises to be impressive. The most awaited are the matches Netherlands v Germany and Netherlands v Portugal.

Our prognosis: the group’s winners are Germany and Netherlands.

Quarter-final promises to be a real show with such cool teams to play. Make your own prediction with our EURO 2012 analysis to help you.

Our prognosis concerning the first two teams expected to meet at quarter-final EURO 2012 is the following: